Your Gifts are Helping Communities in Southeast Asia

Previous Next
Your Gifts are Helping Communities in Southeast Asia In the last few weeks, a series of terrible typhoons hit large parts of Southeast Asia. Many people described the flooding as the worst that they have ever experienced in their lives.

Harvesters’ Regional Director for Southeast Asia explained that a country like the Philippines is used to severe weather. This country faces up to 20 tropical storms or typhoons each year. “However, in November (2020) five storms in four weeks followed and the effects of these typhoons caused by strong winds and torrential rain has left widespread damage,” explained the Regional Director.

Roads were covered with water and in some cases almost buried in deep mud. Thousands of people have been displaced and hundreds have died. The country was already in a very dire situation due to the COVID-19 pandemic.

It has been estimated that these storms have affected more than 2,5 million people which also includes countries like Cambodia and Vietnam. Storms made their way west from the Philippines and drenched large parts of this region.

The Regional Director shared an amazing testimony. “Pastor T*, a Harvesters Ministries Hub-leader, plants churches in the Quang Nam province in Vietnam. On November 1, I called him during the early stages of Super Typhoon Goni. He told me how the wind had ripped off many of the houses’ roofs in their village and water kept rising rapidly in his neighbourhood soon being neck-deep in many places. The power had been turned off in the province, and he did not expect his phone’s battery to last much longer as we continued to speak.”

Pastor T’s family had to evacuate their home because almost all their possessions and the church’s equipment was completely submerged in water. First, they moved to his parents’ house but had to evacuate for a second time as the water kept rising. “When we spoke the following day, T told me that they were higher up in the mountain with three families and were now staying with his cousin,” said the Regional Director.

The storm had moved on relatively quickly but has left many villages with roads either washed away or cluttered with fallen trees and power poles. Houses, which are often used as house churches as well, were now buried under the pile of rubble and sand. 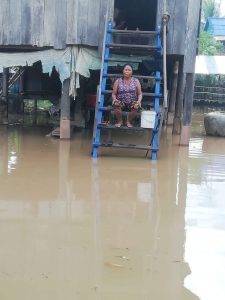 The Regional Director further explained, “I managed to contact two stream leaders from Hanoi and Ho Chi Minh City. They agreed to visit the area a few days later to assist those Hub-leaders and communities who were hit by the typhoon and had to act quickly as the next typhoon was about to make landfall.”

The stream leaders, together with pastor T and a few other Hub-leaders who were supplied with initial relief packages from funds raised, were also able to help others in their communities, while rebuilding their own homes and lives.

Harvesters Ministries’ stream leader in Vietnam has been able to help distribute aid to those most affected but supplies are very limited due to the typhoon and the continued effects of COVID-19.

Even though typhoons were spreading chaos, pastors are still sharing the Gospel and spreading hope. The power of the Gospel in Vietnam is profound. When you look at a life which has been changed by Christ, it changes their family, their work, communities… it changes every aspect of their lives. This happens when a Hub-leader is willing to go and take the Gospel to unreached villages.

This outreach led to two newly planted churches. Praise the Lord for expanding His Kingdom despite the chaos and destruction of the storms that hit Southeast Asia.

Even though he has been forgotten by the community, an 83-year-old man with no wife and no children has heard about the One who loves and cares for the destitute. Thanks to your generous gifts he is now saved and will have eternal life.

Your gifts are opening the way to win souls for Jesus in Southeast Asia and build God’s Kingdom.